While inspecting a patch of corn on the farm the other day, I found this strange looking ear of corn. Wondering what this strange growth was I pulled it off and tried to do some research. After a few minutes of googling I looked up some pictures of huitlacoche and sure enough it was a match! How cool! And thus began my dive into the history of this strange corn fungus.

Huitlacoche has origins that go all the way back to the Aztecs, Hopis, and other various corn-growing Native American groups of the Southwest. The word comes from the Nahuatl language and literally can be translated to “raven excrement.”  In English it is referred to as “corn smut” or even in the culinary world as a “Mexican truffle.”

It is a naturally occurring fungus that is edible and has been considered a delicacy for thousands of years. It can be found in the kitchens of Mexico; I’ve seen it in restaurants in San Antonio; it is even grown commercially and sold canned or frozen. Culinarily, it is very similar to any other mushroom and is prepared often as a filling for tacos, tamales, empanadas, soups and stews . It apparently has an earthy taste and retains a slight corn flavor. It is interesting to note that it has one of the highest protein contents in the mushroom family.

Huitlacoche is produced after heavy periods of rain or moisture so it makes sense to have found it when I did. This spring and early part of the summer have been abnormally active in terms of precipitation as anyone in the state of Texas will attest to.

I scoured the fields looking for more but saw no signs of it on any of the other ears of corn. Perhaps this is why it is a delicacy; it appears in small proportions and, in certain areas, depends on moisture that is sometimes scarce. Some farmers consider it a blight and an unwanted infestation calling it “devil’s corn.” But since knowing the history and various culinary possibilities, I welcome the fungus among us and am ready to fire up my skillet and try this ancient delicacy. 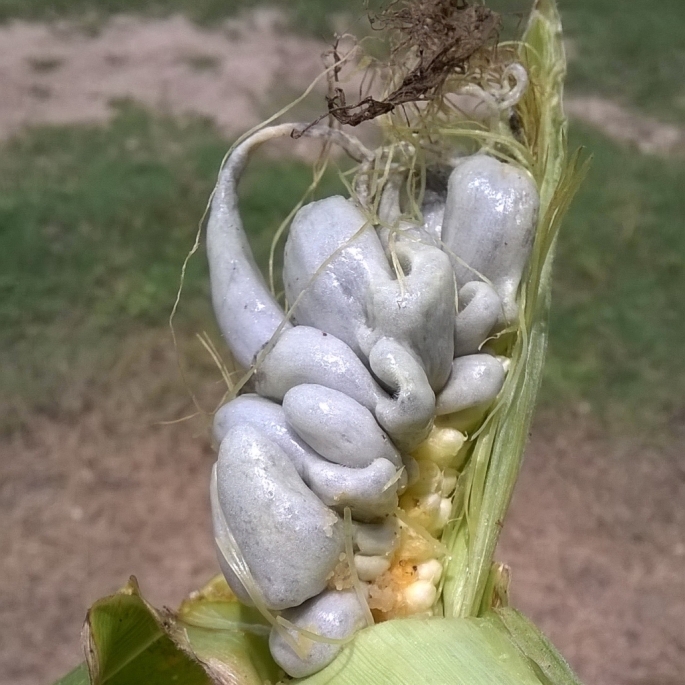