Green Crew began their fifth hitch of the season with a day on the road to the Kincaid Recreation Area in the Calcasieu District of Louisiana’s Kisatchie National Forest. This was our first of many hitches to Louisiana and we weren’t too sure what was ahead of us. In fact, our expectations about the state were actually quite low compared to what we were about to receive over the ten days we spent there. First and foremost, upon arriving at our quiet campground we were greeted by a well-aged gentleman named Sonny – the camp host. He was hospitable, intriguing, and along with his wife, very gracious towards us throughout our entire stay.

They weren’t the only nice people we encountered in Louisiana, however. Our project partner, Alleyn, was very down to earth and friendly as well. The entire crew enjoyed having him around not only to work with but also to talk to and learn from. He shared some of his life and career experiences about his military background and wildland firefighting as a hotshot. He also gave multiple crew members advice on where to look next on their career paths.

Receiving clear direction from Alleyn, we worked on several projects over the course of our stay in Calcasieu. We reinforced two walking bridges by installing bags of concrete underneath either end to prevent further erosion of the stream banks under the walking surface. We walked along many miles of trails digging small reroutes along the way to avoid especially muddy areas. Wooden structures on the beach were painted or repainted. Vines and other vegetation were cleared away from sawmill ruins to make them more visible and accessible from an existing trail. On the last day we were to pick up trash along three miles of trail, which there wasn’t very much of, but just off the trail we discovered a site that people had turned into a camp area and had destroyed with heaps of trash. 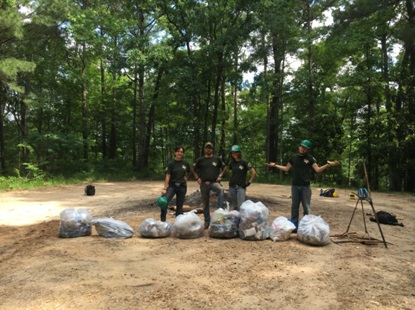 Though it wasn’t asked of us, we knew it would likely not get cleaned up if we didn’t do it then and there, spending most of our morning filling up bag after bag with cans, torn clothes, and all sorts of questionable materials. This variety of work kept things
interesting all the while and allowed us to develop skills in multiple disciplines in a short time.

During our days in Kincaid there were two exceptional highlights and one somber low-light. The low point struck when one of our most persevering crew members sprained her ankle while clearing vegetation. This event left her unavailable to work for most of the remainder of the hitch and for another two weeks afterward while her ankle healed. It also left her frustrated because she wasn’t able to help us with our projects which shows her commitment to the success of the crew. But a boot and crutches didn’t stop her from experiencing the highlight of the trip when the crew took a short drive into the town of Alexandria to check out the Alex River Fete. This was a free, small art, music, and food festival that drew in a crowd comprised of all sorts of different people to enjoy a nice summer evening. The crew was able to distract themselves from the usual work and camp routine by chowing down on greasy grub and grooving to some funky rock music. The second major high point of the hitch was when our member Chandler had a birthday. We threw a little party for her by grilling burgers lakeside and even baking a birthday cake in a stove top oven complete with candles.

Yes, I admit, myself and other crew members were wary about the people and the environment we’d come across in Louisiana for our first time. But we were all joyously surprised by the friendly personalities we were lucky to meet, the culture, and landscape that Louisiana had to offer. From here on we were to spend much more time in Louisiana at other districts of the Kisatchie National Forest but this first hitch was a little extra special. 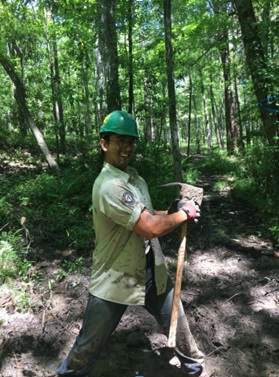 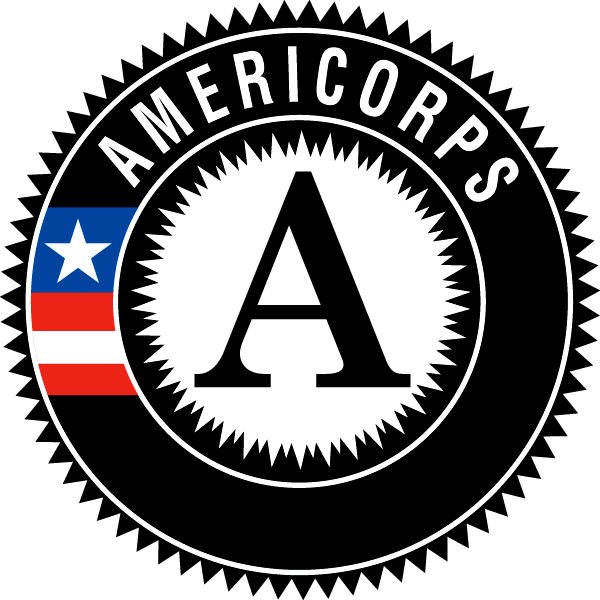