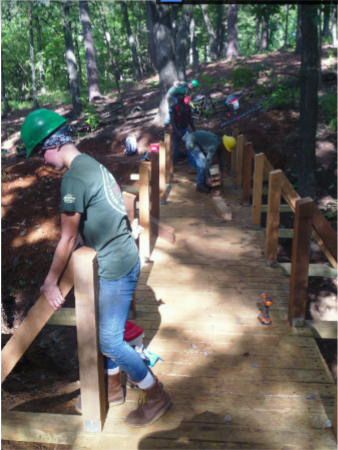 This hitch was a blast for the TAT crew. We spent some time finishing up two of
the bridges in Tyler State Park, started another bridge and a crib wall, as well as
some general trail maintenance. While it has been interesting coming onto a crew
that’s already halfway through their term as a new guy, they have all been very
welcoming. Since everyone on the crew was already fairly experienced, they were
able to help me learn along the way. The jokes, the communal cooking, sweating in
the humidity, and the evenings spent around the fire are all part of the camp life
while out on hitch. By the end of 10 days I felt as if I had known the crew for 10
months.
The weather on this next hitch is expected to be cold, rainy, and absolutely
dreadful, yet somehow I just can’t wait to get back into the woods. My life back in
Austin feels like a waiting period to recuperate for the next push on our trail project.
Somehow the idea of living in a tent sounds better than being in an apartment,
dealing with mosquitoes rather than traffic, smelling like a campfire, sharing food,
and not having wifi sounds really awesome. I’m really excited to get back to waking
up with the sun in the morning, working in the woods all day, and going to sleep
with the stars overhead.
The work isn’t easy, sometimes the food goes bad, and its not always painless to
live and work with the same 8 people for ten days straight, but so far TAT has been
an amazing experience. At the end of the day when you’re tired and sore, you can
look back and see the work you did, and know that it helped make our world a
better place. I hope that feeling warms my heart when it reaches 40 degrees later
this week!