Over two weeks, Red, Blue, and White Crew was able to build a .3 mile trail in a fresh patch of land in Cedar Park, TX, which will soon be called Lakeline Park. The park resides in a residential area of the city, and is administered by the City of Austin. The crew is excited to see foot traffic passing through the trail as pedestrians may divert from the unpaved sidewalk into the park, where they will see a small but active creek as well as some large Live Oaks.

Red Crew began the project by removing invasive species such as Ligustrom, Chinese Tallow, and China Berry throughout the park and applying Garlon 3A and Eraser to low-cut stumps to prevent the species from growing again. This aspect of the project was the most educational for Red Crew, who had limited experience in manually identifying the three invasive species. Now, by identifying leaf patterns, the crew has been more fluent in locating the trees and removing them.

The next part of the project involved the cutting of tread for the short trail. Using McLeods, Loppers, Handsaws, and Pulaskis, members opened up the corridor of the trail to 9 feet in width to allow passersby ample space, with an 8 foot height to prevent branches from hanging near people’s faces. The Pulaskis allowed crew members to remove large roots from the middle of the tread, which posed as tripping hazards for those unaware of the rough terrain.

For quality control, Red Crew removed brush from the trail, aiming to minimize sight lines to brush piles. The crew took good care to minimize the size of brush piles with the use of chainsaws if they were to be easily seen. The crew took several passes over the tread to smooth it out, citing some difficulty with some of the rocky terrain. Naturalization was also a large challenge, as several sites near the trail were dedicated to low-stump cutting invasive species, which covered parts of the trail in saw dust. 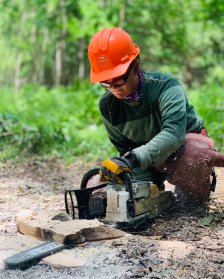